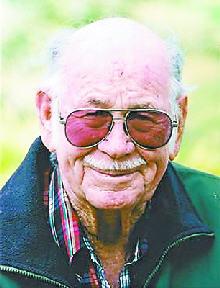 John Cameron, a member of one of the pioneer families of Santee, passed away at his home in Lakeside, January 18, 2015.

He attended Grossmont High School and was in the Navy during World War II. When he returned home after the war, John joined his brother William Cameron and formed Cameron Brothers Construction Company. They were members of AGC, EGCA and BIA.

John and Shirley were married for over sixty years, they loved hunting, fishing, camping and were able to do a little traveling. In later years, they divided their time between Santee and the Borrego Springs housing development and Resort.

Services will be held at Paris-Frederick Mortuary, 678 South Mollison, at 10:00 a.m. Tuesday, January 27. Officiating at the services will be his nephew Joe Sturz of Greenville, NC.

In lieu of flowers, the family suggests donations in his name to the Santee Historical Society, PO Box 71036, Santee, CA 92071.